The East Coast, also known as the "Eastern Seaboard" or "Atlantic Seaboard," refers to the easternmost states of the pre-War United States. While in a strict geographical sense it includes the entire eastern seaboard, in popular usage the term "East Coast" is most often used to specifically refer to the northern half of this region, which is also known as the Northeastern U.S. 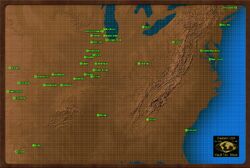 Adams Air Force Base was a major United States Armed Forces military installation before the Great War. Located just outside the Capital Wasteland, the base is accessible through the Presidential Metro, and in 2277 served as a secondary headquarters for the Enclave, supplementing their installation at Raven Rock. Enclave operations here were centered in the Mobile Base Crawler, which had the capability to call down orbital strikes on several locations in the Capital Wasteland.

The Capital Wasteland is the area surrounding the former city of Washington, D.C., including portions of the former District of Columbia, Maryland, and Virginia. As of 2277, the area is overrun by super mutants, raiders, mercenaries, and numerous other dangers that threaten the small human and ghoul populations.

The central hub of civilization in the former capital's ruins is Rivet City, a settlement housed in the remains of a beached aircraft carrier. Other settlements include the towns of Megaton, Canterbury Commons, Andale, Tenpenny Towers, Paradise Falls, and the Brotherhood of Steel Citadel within the ruins of the Pentagon. Movement through the ruins of the downtown Washington, D.C., area itself is facilitated by the remaining Metro tunnels.

The Commonwealth is the remains of the pre-War state of Massachusetts. Like most other major population centers of the United States, it was ravaged by the Great War, and is as lawless and inhospitable as the Capital Wasteland. Despite its anarchic nature, it is also home to the mysterious Institute, which has continued to develop advanced technology even after the massive amounts of destruction caused by the Great War. Among its accomplishments are artificial intelligence and androids, built as a servant class, with other models serving as trackers to return runaway androids. The Railroad, another organization within the Commonwealth, works against the Institute to free the enslaved androids.

Nothing is known about this area, other than the fact that it is on the coast. It is only mentioned once, in a single line of dialogue from Quinn. When asked "Travel? Where do you go?" he responds "Oh, here and there and everywhere. I've explored all up and down the coast, from the Commonwealth, to The Pitt, all the way down to Crater Banks."

The Island, also known as Mount Desert Island, was a former tourist hub wasn't ravaged by the Great War, but instead slowly overtaken by a mysterious fog. The Fog grossly mutated and transformed both the wildlife and humans that came into contact with it. The town of Bar Harbor has since become one of the last remaining havens of civilization in the area, as a local group of Children of Atom and a settlement of synths have recently arrived to the region.

Great Lanta is the birthplace of Saint Monica, who is venerated by the Church of Saint Monica aboard Rivet City in the Capital Wasteland. The exact location of Great Lanta is unknown, as it is only mentioned once in a sermon by Father Clifford, where he describes it as "on the shores of the ocean." The name suggests that it may be related to the Greater Atlanta area but that does not extend to the coast in our world or it could be referencing Atlantic City.[1]

Centered around the Nuka-World amusement park, the region was home to a number of tourist traps and a town. The actual park, while once having been settled by traders and were then enslaved by raiders, has since become inhospitable apart from the main hub of Nuka-Town.

The region of Point Lookout, Maryland, just south of the Capital Wasteland, was home to a small seaside resort town established after the 1950s. Point Lookout was one of the few places in the United States not directly hit by nuclear bombs during the Great War, but lingering radiation in the waters of the Chesapeake Bay has had a significant impact on the area's wildlife and native population. The effects of the radiation were amplified by inbreeding which led to large amounts of deformities in the native populations.

The Erie Stretch is a region located somewhere along the coast of Lake Erie, possibly even the city of Erie, Pennsylvania. It is only mentioned once, by the Pitt slave Brand, who asks "You're new, aren't you? Are you here from the Erie Stretch? The Capital Wasteland? Ronto? Where's home?"

Monroeville is an area east of The Pitt, known to have significant ghoul and trog populations. It is mentioned only once, by the Pitt slaver Everett.

Philly is the name given to the ruins of the pre-War city of Philadelphia. It is mentioned on Abraham Washington's terminal where he states that the Liberty Bell is still intact and "is laying in the ruins of Philly." He also mentions funding an expedition to retrieve it from "that dump."

The Abbey of the Road

The Abbey of the Road is a Christian monastery located far west of the Commonwealth, though its exact location is unknown. The church's main concern is the well-being of the other Christian churches along the East Coast.

The Pitt is a raider settlement built from the decaying infrastructure of the city of Pittsburgh, Pennsylvania. The settlement is divided into two main areas: Downtown, where slaves work and live, and Uptown, where the raiders live. Downtown includes quarters for the slave population, The Mill, and the abandoned Steelyard which is inhabited by Wildmen and trogs and contains remnants of pre-War manufacturing facilities. Uptown contains the Abandoned Apartments, an area of housing which as been left by the Pitt raiders and is inhabited by a fairly sized trog population, and the Haven building, which the personal palace for The Pitts leader, Ishmael Ashur. A network of ramps and bridges connects the upper floors of The Pitts dilapidated buildings in both parts of the settlement, serving as platforms for raiders to oversee the working slaves.

Little is known about Ronto, including its exact location. It may refer to the city of Toronto, Ontario, or Toronto, Ohio, which is located 30 miles from The Pitt, down the Ohio River. By 2277, Ronto had established itself as a notable regional power with a reputation that extended as far as The Pitt.