This is part 2 of the Denver design document for Van Buren, the cancelled Fallout 3 by Black Isle Studios.

The Locations section of the document will probably be a series of entries, each one describing each location within the area. Designers will determine what format and procedure works best for them. Each location section should probably cover the following information, however:

The Old Camp is ... the old camp of the NCR salvagers before they were driven out by a huge dog attack. Built under and around the freeway, it has limited access unless you can climb. It contains a lot of the salvagers' stuff, particularly their generator, which they could really use in the new camp. 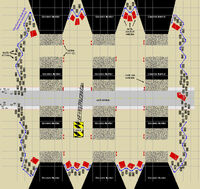 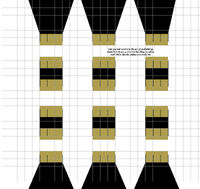 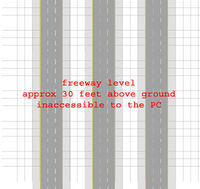 [I have layered Photoshop maps of this area that are probably easier to read than this version imported into Word. Just contact me (Sean) if you need 'em.]

[I have layered Photoshop maps of this area that are probably easier to read than this version imported into Word. Just contact me (Sean) if you need 'em.]

This is where the "evil" salvagers live. They're not evil in that they're raiding other peoples' claims, they're evil because they shoot anyone who gets too close to their turf. Unfortunately for them their turf is in a poorer part of town and they haven't been able to salvage a lot of stuff, which is partly why they're pissy. This is where you'll find the "evil" salvagers. Unfortunately, one of the klaxon repair stations is in their turf, so you'll have to deal with the RSC or sneak around if you want to fix that stuff.

[I have a layered Photoshop map of this area that are probably easier to read than this version imported into Word. Just contact me (Sean) if you need 'em.]

The downtown train station in Denver. Here's where you can go to figure out where the rail lines run, and might be able to salvage some parts to get a working train (or at least a hand-car) put together. If you get the trains running, this will become an important area and will need some security (to make sure visitors are safe from dogs and raiders).

These three areas share the same map, though two of them have their own sub-maps for other floor levels.

The HQ for the Denver police. Here's where you find out about the pre-War riots, food lines, plague outbreaks, canine units, locations of other important buildings in the city, and (if you're lucky and good with computers) the location of the Chief's fallout shelter, a secret area). In the basement are the 3 CRB-S units, which activate when the PCs enter the city limits. Dogbody now lives in this building, planning his revenge against the NCR salvagers (since "they" killed his dogs).

Nearby are the ruins of City Hall and the Denver Mint

BJ's lair, heavily fortified with explosives and traps. If you try to enter this place while he's here, he'll snipe you in the hopes of pushing you into one of his traps. You're best off entering this place while he's dealing with the traitors as they try to crack the Box. You can find Bombay Jack here.

His lair has a mechanics lab and a science lab (which he uses to make his bombs), which is one reason he wants to stay here.

Movies/FMV/Scripted Cut Scenes: FMV of Jack's building being demolished (like a professional construction crew demolishing it, collapsing vertically on itself) 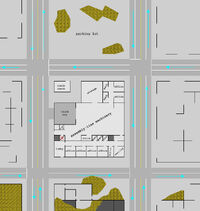 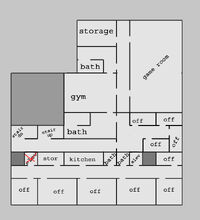 A robot manufacturing plant within a façade of a large office building. If activated (such as by forced entry or by activation by ARGOS) it begins building robots to patrol and secure Denver, providing continual respawning of robots until the place is shut down (practically impossible). Going through the surface-level doors (blast doors) takes some serious firepower, but there's an easier entrance via the sewers.

Special Scenery Objects: assembly-line machinery (like in a parts factory), observation windows, security doors, video walls (they look like windows but they're TVs that show outside scenes), ZAX unit, cryogenics storage (for brains for brainbots) 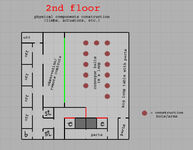 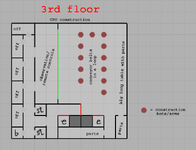 There are four locations in Denver where you can repair the klaxons to complete a quest. All four are buildings where some machinery/a computer controls the sirens that were once used for bomb alerts and other citywide alarm broadcasts. With these sites repaired, the PC can broadcast messages through the entire city without using radio, and can hook up the ultrasonic device to the klaxons to drive all of the dogs out of the city. Three sites are included on other maps, while site # 4 is in the boonies (somewhat near Bombay Jack's canyon) and has its own map.

These guys are camped out in a hotel in south Denver with some slaves they've rounded up. Every couple of weeks they send a pair of fast guys out east to see if the radioactive dust storms have subsided for the season. Once they do, they'll head out.

They have the lower floors secured with chain link fence and barriers made of junk. They keep the dogs away with chemical repellant sprayed in the area (resprayed every year when they return here). They're well-armed (as far as wastelanders go) and alert. They stay on the 2nd level, though they are watching their surroundings (they'll be alert to your arrival unless you manage to sneak your way in) and might have a sniper hiding out on the ground floor. They keep the slaves locked in rooms on the 2nd and 3rd floor. 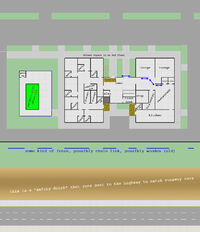 You can only find this if (a) you're lucky and good with computers and dig it out of the Police HQ computers, or (b) are obscenely lucky and walk across its location on the Denver map. Stashed in here are some supplies, light armor, and weapons (including stuff relating to the dogs). 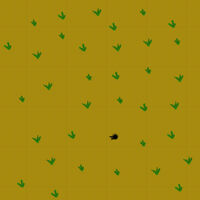 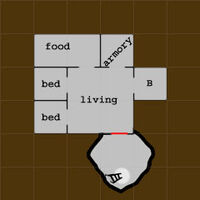 There are at least two locations like this where a section of the city is blocked off with instapens. Some have been pulled down by rioters or knocked over by two hundred years of neglect. Any people once held inside have long died and been eaten by the dogs.

Standardized maps to use as base layouts for levels within skyscrapers. Random Denver maps will pull from these stock levels, and floor maps in detailed areas will use these layouts as models. The lowest floors may have dogs if there are stairs connecting them to each other, higher levels have radioactive climbing lizards. Typical levels are gymnasium, cubcles (variant 1, variant 2, variant dotcom), executive, lobby, security.

The sewers are used to gain access to underground areas of other parts of maps (such as The Box, which is most easily accessed via the sewer level). They aren't used to travel long-distance through Denver, though there are some random sewer maps if you use sewers in some areas.

A tall hospital, almost a skyscraper. Many people hit hard by The New Plague were taken here and ended up dying here. Many beds still have the old, old skeletons of these unfortunates, with many more piling up in the morgue as the last days of Denver passed. A lot of potential salvage here for a medicine-oriented Science Boy.

Dogs sometimes run around in this building, and have been known to chew on bottles of pills and get extremely chemmed up on Mentats, Buffout, or painkillers.

City Park is a big open place that's sorta green and has a lake in it. Here's a scrollable panoramic of it:

The hospital isn't pictured in this panoramic because the hospital was built in the 2060s (after these modern-day pictures were taken, obviously).

Tileset: City (for the hospital), grassy (for the park itself) 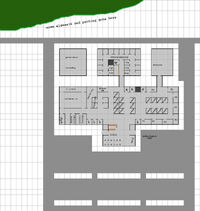 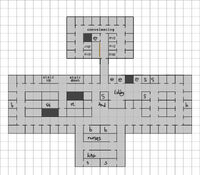 A pub/brewery/restaurant in Lodo (downtown Denver ... imagine a Rock Bottom Brewery and you get the idea). Still has working facilities for making beer, including the recipes, so all they need are some repairs and people with the time, skill, and patience to start brewing beer. With the brewery up and running, the salvagers could earn some income without