Deathclaws are mutated creatures in Fallout and Fallout 2. They are large, agile, and strong species of mutant horned Jackson's Chameleon.[1]

The following section is transcluded from deathclaw. To modify, please edit the source page.

Deathclaws are a 6 meter (20 feet) long[2] carnivorous[3] bipedal reptile species, designed for maximum lethality. The choice to make them bipedal was natural, as bipedalism raises the head, providing a greater field of vision and thus improving the ability to detect targets and resources. The upper limbs were also freed by this choice and could be fashioned into extremely dangerous weapons. The caveat is that the deathclaw is not as fast as a quadrupedal animal, though this is a largely academic concern. The rippling musculature of the deathclaw provides it with superior strength, excellent speed, and incredible resilience in most combat situations.[4][5][1]

Of course, their strength is magnified by their claws. Owing to their lineage, the deathclaw has opposable thumbs, though an additional two fingers were coded into the genome, for a total of five fingers in each palm. Each terminates in a sharp talon that allows the reptile to wound and kill with frightening efficiency – a single swipe is capable of bisecting an unarmored human[6] in seconds.[7] Deathclaw hide is extremely tough, providing excellent defense against blunt and edged weapons. Firearms and energy weapons are reliable tools for killing a deathclaw, though lower powered variants are very likely to have trouble penetrating it. Defense is enhanced by horns and dorsal spikes, making melee combat a very dangerous proposition. The deathclaw is an apex predator of the finest sort – and the advice for fighting in close quarters would be: Don't.[8]

However, while they are difficult opponents, their keen senses can be used against them. Loud noises and bright light, such as that emitted by flares, can be used to keep a deathclaw at bay or even deter its advance.[9] 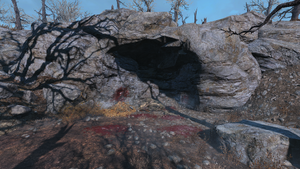 A lone deathclaw nesting in the Commonwealth.

Deathclaws are pack animals, with the leadership role assumed by the alpha pair – the strongest male and female deathclaws in the group. The remainder of the pack follows the leaders and migrates along with them.[1] Deathclaws communicate with each other in a pack using growls and body language, though they are also capable of mimicking human voices like a parrot, if their intelligence is artificially increased.[1]

Coupled with their pack behavior is a fierce territorial instinct. Deathclaws will usually opt for territories away from inhabited areas (most likely due to noise), but may settle into temporarily abandoned human buildings and areas, as was the case with the Boneyard warehouses circa 2161 or Quarry Junction in 2281.[10] Once it claims a territory, a pack is exceedingly difficult to dislodge, as the alpha male will not abandon a claimed territory even if the pack mother is killed,[11] while the alpha female will simply choose another mate to procreate.[12] As such, reclaiming a deathclaw territory usually requires either killing both pack leaders, causing the pack to scatter,[13] or wiping out the entire pack. Neither is particularly easy.[14]

A pile of hardy deathclaw eggs.

While deathclaw eggs are durable and resilient, with an extremely long shelf life,[17] deathclaws will seek out dark, sheltered areas to set up their nests.[18] Lone deathclaws will also claim territories and create nests, usually in sheltered, secluded areas. If they are female and have been impregnated by a male deathclaw, they will prepare a separate nest for their young, protecting their hardy eggs with whatever small objects are at hand, such as small rocks, fallen leaves, twigs, and bones leftover from their meals.[19]

A juvenile deathclaw is born without prominent horns or dorsal spikes, which grow as it matures, and both of which act as secondary sex characteristics. Horns grow forwards on males, with larger being the more desirable,[20] and grow back and upwards on females.[21] Dorsal spikes grow much the same way as horns on males and act much the same way with larger being more desirable,[20] but on females dorsal spikes do not grow as large as they do on males and tend to be short in comparison.[21] Claws, on the other hand, are present from day one – and likely play a role in breaking through the shell. Baby deathclaws are born with a light brown skin tone and live under the protection of their parents within the pack.[22] The skin darkens as the deathclaw matures, reaching deep brown upon entering adulthood,[23] and eventually dark brown, black, or even black and blue for old, experienced claws.[24]

While deathclaws do not actively seek out human habitats to attack, human expansion inevitably leads to the two species coming in contact, usually by accident.[25][26] Deathclaws are incredibly dangerous to humans, no matter how well protected they are. Even Brotherhood of Steel patrols are known to suffer major casualties if they walk into a deathclaw territory unawares.[27] The Enclave sought to exploit their fierce instincts and ferocity and use them as cheap, expendable troops for use in hostile environments. Their initial experiments, starting in 2235,[28] focused on using the modified FEV to artificially increase the intelligence of deathclaws and succeeded in creating a single pack of modified, intelligent deathclaws led by Gruthar. Intended to only be smart enough to follow orders issued by their handlers, they have developed far higher intelligence than the project assumed was possible. After the first unit was fielded, Doctor Schreber's experimentation revealed that fact and the whole breed was summarily exterminated at the site they were first unleashed: Vault 13.[29] Subsequent efforts, once the Enclave regrouped at Raven Rock, were focused on cruder, but more reliable methods: Domestication units. These devices are surgically implanted into a captive deathclaw's brain and skull, allowing Enclave troops to issue commands to the fierce reptiles as if they were pets.[30] Of course, even without human interference, deathclaws are a continuing hazard in the wastelands. Despite the efforts of hunter teams, they continue to set up nests throughout the wastelands.[31]

The ferocity of deathclaws and their incredible resilience has earned them the respect of wastelanders. Its existence was treated in skepticism in the first century after the war,[32] and was considered a tall tale on the order of ghosts and demons,[2] the steady increase in deathclaw population eventually secured them a place in the common consciousness. When used for comparisons, deathclaws are usually synonymous with ferocity and resilience.[33] Occasionally, they're used to insult people – allegedly they're as bad as marketing directors.[34] Other examples of deathclaw presence in popular culture is the expression "deathclaw in a mating season",[35] and, allegedly, deathclaw costumes.[36]

Deathclaw eggs are also a known delicacy, used to make omelettes that are highly nourishing and delicious at the same time.[17]

Deathclaws have a very limited presence in the game and are treated as myth by most characters the player interacts with. They are encountered in three instances:

The deathclaw is a powerful adversary and shouldn't be taken lightly at any moment, especially with its high amount of action points and damage output. The one at the Hub can be confronted with as little as Dogmeat, a metal armor, and a shotgun, but will require a supply of stimpaks or a lot of luck while taking shots to the eyes. The ones at the Boneyard appear in groups of three, with 250 hit points each and grant 1000 experience points per kill. They respawn every hour unless the mother is killed. She's found in the basement and has 320 hit points. Killing her nets 1500 experience points.

Animal Friend does not affect deathclaws.

Deathclaws are much more numerous, especially down south. They are commonly found in random encounters in the Central Valley. They are fast, lethal, and durable, sometimes accompanied by the smaller juvenile deathclaws.

The game also features a tribe of intelligent deathclaws, located at Vault 13. The pack is led by Gruthar and Goris, his son, is a potential companion for the player.

The following section is transcluded from deathclaw. To modify, please edit the source page.
“

Was it always a big scaly lizard thing? Nope. My initial design for this terrible creature was a the apex predator of the wasteland, a mix of wolverine and brown bear, mutated by the FEV. It could survive any environment and feared nothing; a legendary force of nature that struck terror into the hearts of men! Unfortunately, the artists took one look at my concept sketch and said, 'Dude, that's way too much hair.' It was true. The Wolverine-bear was very furry, and there was just no way around it.

So here's what happened: the newly formed Black Isle started work on what would be Planescape: Torment. One of the first art pieces was a monstrous creature called a Terrasque. It was sculpted in clay and was then point-by-painstaking-point digitized into a 3D model. As Planescape moved forward, it turned out that the Terrasque wouldn't actually be featured in its design, leaving that tasty model in disuse. Thus, the furry wolverine-bear became a hairless reptilian biped. (Take a look at page 339 of the D&D second edition Monster Manual. Holy cats! It's a Deathclaw!)

I met my first Deathclaw in middle school, playing Fallout on a friend's machine, and I fell instantly in love with these "Dragons of the Waste." It was an honor to tackle them for Fallout 3 - sourcing from both the originals and the concept art of Adam Adamowicz - but I'm proudest of my Fallout 4 redesign.

To improve upon their F3 counterparts, I gave the newer ones thicker, more armored skin; shorter, strong-looking claws and hands; a bull-like redesign to the horns (to suggest the ability to ram); and a thicker tail - heavy enough to act as a counter-weight when it ran. It's important to note, too, that the Deathclaw is not a mutant, but a hybrid bioweapon created by the US military. To that end, I incorporated chameleons, alligators, bulls, panthers, serpents & lizards into their design.

The deathclaw appears in both Fallout and Fallout 2. The tough deathclaw version appears only in Fallout 2.