Cyberdogs are dogs which, in the classic cyborg tradition, incorporate both organic and mechanical parts in their being. The abilities of individual cyberdogs vary from dog to dog, but as a rule they are physically superior to their organic counterparts.

Cyberdogs are rare and creating one is extremely difficult, requiring both a high degree of technical sophistication and generalized breeding and training programs. As such, they have only been utilized in scale by technologically advanced organizations such as the pre-War US government, the Enclave and Big MT. Big MT even took things one step further and created weapons (like the K9000) which used a dogs brain as its central processor and could sniff out and lock onto targets.[1]

In addition to military grade dogs, Big MT also produced lesser variants for the nation's more affluent police departments, allegedly to sniff out communists within society.[2] Denver in particular had a large supply of cyber police dogs, and they still roam the streets.[3] 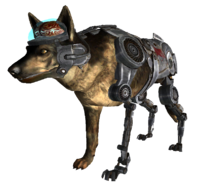 Cyberdogs have the appearance of cybernetic canines (although two exceptions exist) with a yellow cornea (only the "cyberhound Mk III police model" have a normal, white cornea). Cyberdogs of this type are also called "K-9 units". Despite being highly modified with electronic parts, they are not affected by pulse weapons.

Some standard cyberdog models are:

Unique models include K-9 and Gabe. K-9 was created by Dr. Schreber in the Enclave outpost of Navarro and based on the "Cyberhound Mk II personal security model". He includes all the standard modifications above, along with the ability to communicate in clear English and significantly enhanced intelligence. His intellect was roughly on par with most humans and gave him a strong sense of morality, along with a rather dry sense of humour.

Gabe was created by Dr. Borous of Big Mountain Research and Development Center, based on the "Cyberhound Mk III police model". A faithful companion of the good doctor, Gabe was the subject (or victim) of numerous other experiments on Borous' part, most notably a steady diet of Psycho. The constant consumption of this chem had the effect of increasing Gabe's size, making him larger than a human, and increasing his aggression, giving him an apparent habit of eating visitors. In addition, Gabe was equipped with an atomic core that would, upon his death, destabilise and detonate after an indetermined amount of time (the countdown from ten provided by the Think Tank and Dr. Mobius was far from precise). Despite the rather abusive treatment he received from Borous, Gabe remained faithful and affectionate towards his master, often resting his head upon Borous' knee.

A rather peculiar and unique variety of cyberdog is the K9000 cyberdog gun. Instead of being a normal dog enhanced with robotic limbs and organs, the K9000 cyberdog gun is a living dog's brain installed within a machine gun frame, chambered for .357 magnum ammunition. Its "canine" features include two metallic "ears" mounted on top of the weapon that move like a real dog's and a sniffer mounted on the jar, allowing the gun to sense its surroundings. Despite lacking any kind of independent motion, it is apparently capable of humping things - or so Dr. Klein seems to believe. It can be enhanced with a resla roil increasing its damage by 2 and a Mentat chow to increase its rate of fire by 4.

The downgraded civilian version, the Mk II is meant for, as its name suggests, personal security such as protection of the owner and his/her property. The Mk II comes equipped with, unlike its successor models, a cybernetic eye and a two mechanical legs as well as other cybernetic parts along the body. Models can also be heavily modified to allow the cyberhound a high level of intelligence as well as being able to speak a language should a voice box be implanted, such as in the case of K-9; however, modification takes a high degree of technical skill that only the Enclave seem to be capable of.

The latest version of the Cyberhound model series, the support model was a special model meant for chem searches and assisting an accompanying officer during patrols. Presumably, most pre-War police stations employed the use of the Mk III, such as the Denver City Police Department, before the Great War. After the war, however, most cyberdogs became part of the wild dog packs of Dog City, but after Caesar's Legion assimilation of the Hangdogs tribe, remaining cyberdogs, in the case of Rex for example, were used by the Legion for regular raids and assimilation of tribes.

The cyberdog is a non-militarized version of the police/military cyberdog. It was most likely used for companionship rather than combat, as it relies on its speed and bite strength alone for defense. When traveling to Fortification Hill, speaking to Antony will trigger a comment that he has seen similar cyberdogs in Denver, Colorado.

A slightly weaker variety of the military cyberdog, police cyberdogs may contain several types of small energy cells on death. They can be distinguished from military cyberdogs by their unique black and white paint, as well as the red and blue reflective patches on their backs.

The military cyberdog has a sonic bark used as a weapon, and has a chance to knock down the player with its melee attack. They also seem to have the ability to self heal themselves, similar to the MKII Securitrons.

A rather unusual cyberdog in that all of the original canine biological parts have been discarded, except for the brain, which is now housed in the body of a heavy weapon style firearm. It fires .357 magnum ammunition. "Canine" features include two metallic "ears" mounted on top of the weapon that move like a real dog's and a sniffer mounted on the jar, allowing the gun to sense its surroundings. It can be enhanced with a resla roil increasing its damage by 2 and a mentat chow to increase its rate of fire by 4.