You have killed children, the youth of the wasteland. This is considered to be a really bad thing. You evil, evil person.

Childkiller is a reputation title in Fallout and Fallout 2.

As the title suggests, this reputation is earned by killing children. Although the reputation image appears in the character screen after killing one character classified as a child, in order for the effects to be registered by the game you need to kill three (Fallout) or two children (Fallout 2). For the purposes of tracking childkills, only the killing blow is taken into account. If you shoot a child, but a party member or another non-player character dispatches them, you are not affected.

It's possible to be branded a Childkiller after killing just one child in Fallout 2. Redundant scripts tally the kill once; characters affected by this are Jonny, Slags' children, and Curtis. Furthermore, some non-obvious characters are considered children by the game: Myron is one example. 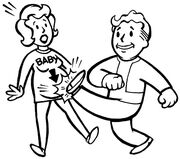 This image was unused and the only Vault Boy image to ever be cut from Fallout 2. (I'm sure you can figure out why) I remember when I got the request to do a perk illustration for "Child Killer" that there would be no way to keep in from being offensive. I mean really! How do you make an illustration of "child killer" and keep it from being offensive? Anyway for some reason, I thought this was the least offensive way to do it. I have no idea what I was thinking. Even the designer who requested it realized it was a bad idea, so we fixed it. Looking back on it now, I can't believe I drew this.