Another day. Another battle. Another trooper dead. When is this shit gonna end?

Camp Forlorn Hope (just Hope to soldiers[1][2]) is the New California Republic Army main camp on the banks of the Colorado south of Hoover Dam in Fallout: New Vegas.

Established in 2274, right after the Republic secured Hoover Dam, the camp was set up around a water source, the Forlorn Hope Spring in an effort to quickly secure the shores of the Colorado downstream. The haste is evident in the mixture of tents, tin shacks, rubble, and sandbags that make up the Republic's primary camp in the south-eastern Mojave. The camp was never overhauled due to more pressing concerns, be it Operation Sunburst, the First Battle of Hoover Dam, or implementing General Lee Oliver's defensive strategy. Unfortunately, this neglect hamstrung the Camp's ability to respond to the Legion's attacks. When Camp Searchlight fell and Legion overran NCR's fledgling outpost at Nelson, Camp Forlorn Hope suddenly found itself on the front line, incapable of effectively securing the shores of the Colorado or dislodge Dead Sea's garrison from Nelson.[3]

The shutdown of the I-15 and Legion raids up and down Highway 95 have strained the supply situation. Water is plentiful, but everything else is in short supply, including food, ammunition, and men. Skirmishes in the no man's land between Nelson slowly deplete the ranks of troops stationed at the Camp and the armory. Morale is at an all-time low, made worse by the Legion's deliberate maiming of soldiers they fight, who are then left to die in the desert sun with booby traps strapped to them. [4] It comes as no surprise that to most soldiers, a posting at Camp Forlorn Hope is effectively a death sentence.[5]

The commander of the Camp, Major Polatli, blames the ineptitude of the Army's highest commanders for the mismanagement of the situation at Forlorn Hope.[6] However, he doesn't plan to sit idle while a Legionary comes to slit his throat and has prepared a plan to turn the situation around: Increasing his troop number, restoring supply lines, and getting the camp into fighting shape so that he can retake Nelson and secure the Army's flank in the inevitable battle for the Dam.[7] 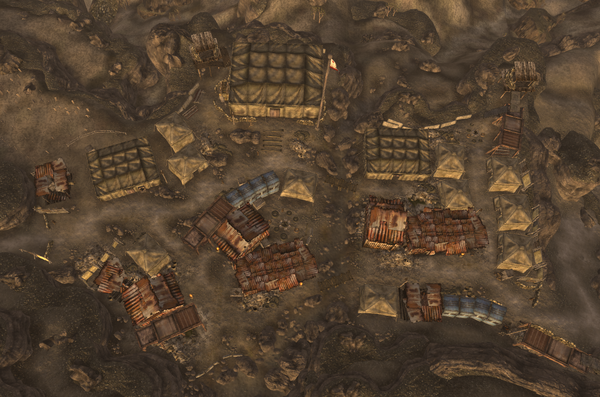 Established on a small mesa overlooking Lake Mohave and the Colorado, around the aforementioned Forlorn Hope Spring, the camp is a ramshackle collection of tents, shacks, and salvaged buses and other junk dragged to the area in the early years of the Mojave Campaign. The camp is roughly divided into two halves by a freshwater creek emptying into the Colorado.

The northern half of the camp contains the spring itself, with the main barracks, Camp Forlorn Hope jail, and latrines just next to it. The medical center staffed by Dr Richards is by the northern entrance and the makeshift guard post, with the Graveyard of No Hope filled with graves of NCR troopers killed in action or lost in the hospital stretching beyond on promontory. Just next to it is a shack, with the command center overlooking the Colorado in the south-eastern corner of the northern part of the camp. Major Polatli, the commanding officer, is here along with Tech Sergeant Reyes coordinating radio communications.

Four tents are squeezed into every available space between the buildings, with a salvaged bus and a covered eating space providing more spots for soldiers to gain a bit of rest in between deployments. A campfire has been set up behind the barracks by enterprising soldiers.

The southern half of the camp is particularly crowded due to less space. More improvised housing sits along the western edge together with a single tent, opposite the mess hall. Behind the mess hall is the storage shed, locked down tightly with a Very Hard lock, with the quartermaster's tent just the opposite. Carl Mayes is found here, trying to make do with what little he has. Further south are five more soldier tents squeezed in between the defensive wall and flanked by bunkers. Beyond that is the frontline and the desolate stretch of no man's land leading to Nelson.

Legion raiding parties will temporarily attack the Camp through the no man's land after starting Restoring Hope. Although the soldiers are usually able to repulse them, especially after the camp is shored-up, named characters are always at risk of dying in the attack. Note that although the troopers dying in the stretch of land between Nelson and the Camp beg for death, killing them outside stealth will cause a reputation drop with the NCR and turn Camp Forlorn Hope hostile.

Spare Us the Cutter