The Vault - Fallout Wiki
Register
Don't have an account?
Sign In
Advertisement
in: Brotherhood of Steel, Apparel

In keeping with its military roots, the Brotherhood of Steel employs a variety of uniforms to maintain esprit de corps, unit cohesion, and set itself apart from the rest of the wasteland. The standard gear evolved over the years, from combat webbing and armor just barely different from that of the United States Army to completely new designs put into service after Arthur Maxson's rise to power.

The common combat gear of the United States Army became a natural choice for the Brotherhood. The custom Brotherhood armor was issued to Initiates and Knights as a standard outfit, bearing the sigils of the Brotherhood and proprietary upgrades. Unmodified units of Army combat armor were also used in some frontier chapters, albeit infrequently. With Maxson's reforms, the standard combat armor modified with a special anti-radiation coating was introduced to Knights operating in the field without their power armor. 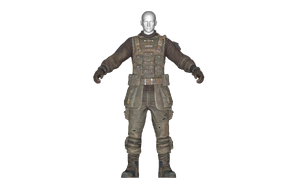 The standard field uniform for Brotherhood soldiers in the Eastern division was introduced after 2277 and the opening of recruitment to the outside. The base outfit consists of a pair of trousers made from durable fabric with thigh pockets and a woven sweater with a pocket on the left arm, a patch reserved for branch insignia on the right, and a pair of fabric patches on the shoulders to prevent wear and tear. They are typically worn with a pair of heavy combat boots, leather gloves, and two more pockets attached on the cruses using leather straps. A sleeveless jacket is worn on top of the sweater, providing additional protection from the elements and a pair of large pockets on the lower flaps, closed using clasps on the front. The final touch is the tactical rig, consisting of a leather vest with seven pockets on the front and an utility belt with an additional three, with two coiled ropes attached to the shoulder and the lower back for use in the field.[1]

The simplicity, utility, and versatility of the designs resulted in widespread adoption of the design, even by Scribes and Lancers. The base outfit is virtually unchanged, save for the addition of headgear or a backpack. The only major differences are in the sweater: The brown of the Initiates and Knights is replaced with red when used by Scribes, blue for Lancers, and white for medical personnel (with the Brotherhood's medical corps sigil emblazoned on the shoulder).[2] 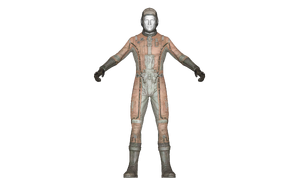 Designed from the ground up for use in conjunction with the West-Tek power armor frame, the next generation underarmor is a form-fitting suit designed for maximum comfort and utility while operating the armor. Although it (or the hood) is not a requirement for operating the armor, it makes long-term use more comfortable and reduces chafing. The hard points and attachments on the suit also improve performance, interfacing directly with the armor's systems. The suit wasn't designed for use outside of armor: It features only two pockets on the hips for documentation and maps and a simple flap over the crotch. Its comfort and lack of bulk allow the operator to combine it with a variety of tactical gear and protection, for example, combat armor.[3][4]

The Brotherhood employs pre-War underarmor not just in its intended purpose, for use by troops equipped with suits of power armor, but as a general purpose uniform. Typically combined with customized standard combat armor, the uniform is issued in three types: Olive drab for soldiers, orange and white for Knights, and jet black for officers of the Brotherhood. Non-standard customizations are popular: Lancers usually combine their uniform with a bomber jacket, while Elder Arthur Maxson wears his with an armored battlecoat. 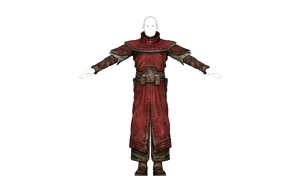 A set of heavy-duty work clothes designed by the Brotherhood of Steel, the robes consist of a durable, double-layered overcoat that protects against environmental hazards and workplace accidents. Leather arm protectors further reduce the risk of injury, as do the heavy boots. A thick leather utility belt is worn for convenience. The robes are typically colored red, although different colors have been used: The Outcasts preferred solid black with red accents on the utility belt, for example.[5] 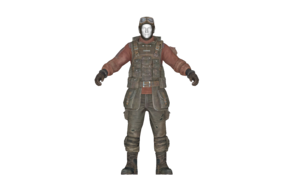 A variant of the standard fatigues, worn with a large backpack, red sweater, and a cap from reinforced fabric combined with an environment-resistant cowl and a pair of goggles. The design is intended to provide Brotherhood Scribes with a rugged, durable uniform for operations away from protected, safe locations. 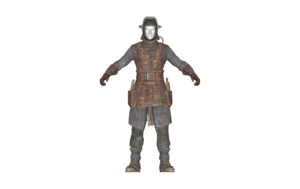 A heavy duty work garment designed for a broad variety of industrial jobs. A thick, padded jacket combined with work trousers forms the base, with a leather apron fitted with a multitude of pockets for tools and parts worn over the top. The apron contains additional hip pouches for large tools and a rear-mounted pair of straps for mounting a blowtorch fuel tank. Each Scribe also wears a pair of thick leather gloves to protect fingers, hands, and wrists from injury. The ensemble is typically worn with a welding helmet, combining a flip-down faceplate with an insulated cowl. Officer uniforms are modified by dyeing the apron black, to make it stand out from other engineers.[6] 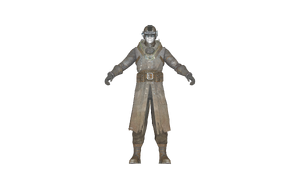 A light, comfortable garment intended for Scribes working in the Brotherhood's laboratories. The uniform consists of pair of durable trousers, leather boots, and a canvas lab coat with pockets for tools mounted on the front, worn over a protective leather jacket and gloves protecting the Scribe from injury or exposure to dangerous substances. The most unique feature is the back-mounted field analyzer, connected to a pair of wrist-mounted sensors, a large collar mounting a magnification lens, and an additional cowl with an optics suite. With these tools, a Scribe can perform research and study samples with less reliance on fixed workstations or delicate laboratory equipment. Officers, like Proctor Quinlan, wear a variant with the lab coat dyed black and a collar without the fixtures.[7] 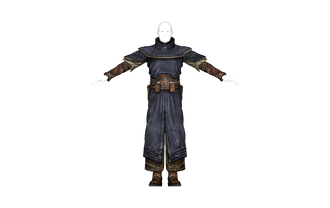 Elders robes are issued to Brotherhood of Steel Elders. Based on the Scribe robe, each is a set of heavy-duty work clothes, consisting of a durable, double-layered overcoat that protects against environmental hazards and workplace accidents. Leather arm protectors further reduce the risk of injury, as do the heavy boots. A thick leather utility belt is worn for convenience. The robes are typically colored blue.[8] 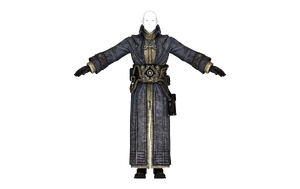 A variant of the classic blue Elder robes, this one is a triple layered outfit. The base is a black, reinforced jumpsuit with combat boots, with a loose beige robe and high collar worn underneath, reinforced with metal components like the recon armor. A blue overcoat is worn on top, providing additional protection from the elements, with an utility belt fitted with various devices and tools, depending on the Elder's preference.[9]

Outfits created for Squires in Brotherhood service focus on utility and comfort, with little in terms of protection, as Squires are not expected to participate in regular combat. The uniform consists of a double-breasted coat with matching pants, a red scarf, a pair of leather gloves and knee-high combat boots made from leather and canvas. A Squire's utility rig focuses on carrying capacity, with five carrying pouches on the front and a large backpack. Each Squire also wears a black field field cap, with a red Brotherhood sigil in the center.[10]