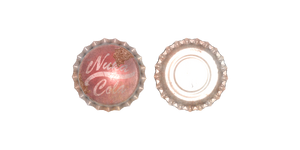 The most common currency in the wasteland, the Nuka-Cola bottle cap.

Bottle caps are the standard currency in Fallout, Fallout 3, Fallout: New Vegas, Fallout 4, Fallout 76, Fallout Shelter, and Fallout: Brotherhood of Steel. In the aftermath of the Great War bottle caps – mostly from bottles of Nuka-Cola – are the most commonly used currency across the former United States of America.[1]

Bottle caps are one of the symbols of the post-nuclear economy. While widely available, they are also in limited supply, as the technology necessary to manufacture them was largely lost to time and the Great War, and difficult to produce by hand. The paint used, machining, and metal type all have to be very specific in order for a bottle cap to be genuine.[2][3]

These factors led to their adoption by Hub merchants in New California as common unit of exchange, backed by water.[4] The adoption took place rapidly, as within ten years of Hub's founding in 2093,[5] caps became the standard currency of the wasteland.[6] For similar reasons, the merchants in the Capital Wasteland also adopted bottle caps, although it is unknown who backs their value. Near simultaneous with events at the Hub, bottlecaps became the standard currency in Appalachia as well for many of the same reasons.[7] And although humanity was all but wiped out around 2102, many vending machines had been modified to accept caps as tender allowing the bottlecap use as currency without anyone around to actually back it.

In the 23rd century, the venerable western bottle caps were eventually supplanted by minted and printed currency, New California Republic (NCR) dollars, backed by gold, rather than water.[8] However, during the Brotherhood War the Republic's gold reserves were destroyed by Brotherhood raids to the point where new gold coins could not be minted and paper money could not be properly backed with gold. NCR citizens panicked and rushed to reclaim the listed face value of currency from NCR's remaining gold reserves. Since the NCR was unable to realize these withdrawals, particularly towards the frontier, faith in their currency considerably dropped. To protect against actual economic collapse, the NCR government abandoned the gold standard and established fiat currency, not payable in specie. Since then many wastelanders lost faith in it as a medium of worth, both as a result of it not being backed by anything but the government's word and the inevitable inflation. In response to the loss of faith, merchant consortiums of the Hub established their own currency, the veritable bottle cap, backing it with water (exchanging a standardized measure of water for caps).[9][10][11][12]

The actual process was very deliberate. The merchants conspired to reintroduce the bottle cap as a currency, out of frustration at NCR's ineptitude in handling the currency crisis. Furthermore, since Hub bridges the NCR core region with the Mojave and lands beyond, the cap was meant to bridge the gap between NCR and Legion territories by providing a neutral form of money. In the time leading up to the introduction the merchants laid the foundations for bottle caps as a currency, establishing control of or destroying facilities that could fashion new bottle caps and seizing excessively large caches of old bottle caps (smaller ones in private hands were left alone, as their owners would readily embrace the returning bottle cap).[12]

To protect their monopoly on the currency, Republic merchant companies, particularly the Crimson Caravan Company, seek to control all bottle cap production and ensure that no one can mass produce them and inflate the currency. Controlling bottle cap presses also allows them to replace worn out and damaged bottle caps, keeping the pool of currency stable. Due to the challenges of the bottle cap production process, small scale counterfeiting is ignored, as it's impossible to manufacture enough caps by hand to truly upset the balance.[13][2][14]

Bottle caps seal the opening of a bottle and are typically colorfully decorated with the logo of the brand of beverage. Plastic caps are used for plastic bottles,[15] and metal with plastic backing is used for glass.

Standard Nuka-Cola bottle caps featuring 21 crimps and ridges, used as the basic form of currency throughout many of the American wastes. Their value differs throughout the game, as in Fallout: New Vegas they don't appear to be worth as much as in Fallout 3.

Physically they appear identical to standard Nuka-Cola bottle caps and are presumably intended to be used for trading in place of actual bottle caps. They are produced by unknown persons, have no trade value, and cannot be used for any monetary purpose.

This nonstandard variant, taken off Sunset Sarsaparilla bottles, is used in the Mojave Wasteland alongside Nuka-Cola caps.

Bawls is a real-world energy drink with a guarana flavor that replaced Nuka-Cola as the main post-nuclear soft drink of choice in Fallout: Brotherhood of Steel. This special type of bottle cap are valued as 50 times that of a Nuka-Cola bottle cap.

How do they account for the fact that they have no control over the number of caps in circulation and any one can come in from outside the area with a huge stock of caps and screw everything up?
Hub merchants like the Crimson Caravan hire people like the Courier to deal with it. Also, there's not a big difference between someone finding a bunch of caps and finding a big chunk of gold. Loss and inflation are only a concern if the difference is large and there's a rush on the reserves. Even when US currency was gold-backed, the government continued to inflate currency numbers. This inherently devalued every previously-extant dollar relative to its backed resource, but they did it anyway because the volume change was usually small.

The reason why the Hub chose to use caps instead of a new currency is largely the same reason why the game universe uses caps: nostalgia. Remember caps? Before NCR hosed everything up? You may even have some caps still sitting around from dad's old stash. Well, that's money again. Hell, if you want to come down and turn 'em in, we'll give you water for them right now. Yessiree, the good ol' days are back again.

I remember my fellow Fallout designer, Brian Freyermuth, asking how much something will cost in a shop. I remember thinking, “cost what?” What was our game currency? We went through a few ideas:

So, I thought, what shiny token-sized thing would you find strewn around the trash piles? Something common, but not so common as to be everywhere? Bottlecaps, of course! (That, and I liked the idea of a string of caps on a chord that jingled when people pulled them out.)