This is part 5 of the Bloomfield Space Center design document for Van Buren, the cancelled Fallout 3 by Black Isle Studios.

There are some important things to consider for towns...

The Tasks section is a list of all the work that needs to be done for the area. It is a good summary for the producer, other designers, artists, and programmers as to what has been done in the area, who to check with if you have questions about certain tasks, and so on.

This section is only useful if it is used. If we're several months into the project and no one has been using it, then it will no longer be used or updated. There's no sense in wasting time doing additional bookkeeping if it's serving no purpose.

The Sound Requirements section is intended to cover every conceivable audio question you've had to answer for an RPG in the past. You know the drill. Some aspects to consider:

An area's going to need sound to make it come alive. Some basics:

Note: If a sound needs to be scripted, include the ID of the sound here - check with Chad if you don't know what I'm babbling about.

The basic chart for SFX would be as follows: 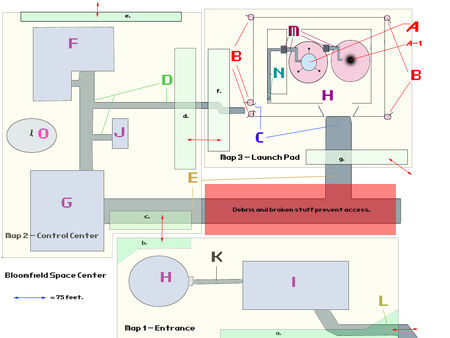 Economics: Bloomfield is rich with materials that can be used for trade of manufacturing. The best source of income for the Rusty Hooks, however, is from the "long-trade-n-raids." When supplies start to get low, Kyle assembles a group of Rusty Hooks and creates a team of raiders who will venture into the wasteland to find caravans to raid. Since Bloomfield is so remote, the raids usually take a little over a month to complete, hence the term, "long-trade-n-raids." Sometimes trade routes are included in these ventures, since the Rusty Hooks can get good trades from the metal materials lying around Bloomfield.

Food: Good hunting around Bloomfield. Since no nukes went off near Bloomfield, the area has natural wildlife to hunt.

Tie to Another Area 1: Bloomfield is very remote. The only ties are what the player develops through adventuring. The launch codes for Hermes-13 are in the Reservation and (presumably) in Boulder Dome. Player may be able to establish trade routes with other areas, but they won't be regular trade routes due to Bloomfield's relative isolation.

Also be sure to include hooks for "room for improvement." This section may change depending on how Ferret thinks it should be organized.

Each area document will also have a list of possible End Movies depending on what the character did in the location. This section should contain:

WHERE TO GO CONDITIONS

4. KYLE IS LEFT IN CONTROL OF RUSTY HOOKS (WTG)