This is part 1 of the Bloomfield Space Center design document for Van Buren, the cancelled Fallout 3 by Black Isle Studios.

Bloomfield Space Center, surprisingly enough, survived the atomic war – well, for the most part. Thanks to its very remote location in southwest Arizona, the only real damage that the space center received was from time and weather – and also the current occupants.

The current occupants in question are the Rusty Hooks, as they like to be called. Comprised of two-dozen raiders, the Rusty Hooks came upon the remains of the Bloomfield Space Center about one year ago, drawn to the sight by tall, pointed structures (two space rockets) that could be seen on the horizon (however, by the time the PC arrives at Bloomfield, Dr. Presper and his NCR guys have already taken the other space rocket to B.O.M.B.-001). The leader, Kyle "the Hook," knew they found a special location and decreed among his faithful that this facility would be their permanent residence and base of operations. The raiders then took up occupancy in the building that was once used for flight operations and communications. From there they managed to get the sub-reactor working (barely) to power the building and the rest of the grounds. However, the Rusty Hooks found out the hard way that the five high powered turrets surrounding the launch pad and the space rockets were active and had no connection to the sub-reactor they worked on (two of the Rusty Hooks found out the bloody way that the turrets were active and deadly). Suffice it to say that the members of the Rusty Hooks kept a respectful distance from the launch pad and the well preserved, twin space rockets, but that situation didn't bother them. All they needed was located right in the building they called home; a healthy weapons and ammo cache[1] stored in the security block of the Operations and Communications building.

The Rusty Hooks are known to make regular raids on caravans from the tribes in the area – the area being pretty much all of Arizona. Raids have been known to last upwards of a month or so. Just about anything is fair game to them, and they are willing to trade with anyone who does not have a problem with where they get their merchandise – though very few people in the wasteland know about the Bloomfield Space Center or how to get there. However, the Launch Pad and the twin space rockets are very visible from the horizon, so those who have seen it usually wander to Bloomfield in curiosity. Unfortunately, those who do happen to find the facility rarely lives long enough to go and tell anyone else, thanks to the turrets guarding the Launch Pad's perimeter. Should someone be lucky enough to live after finding the Bloomfield Space Center, they would find that there is a touch of dissent within the ranks. Bear, Kyle's super mutant bodyguard and right-hand man, seems obviously more intelligent than Kyle and seems to be the one who dishes out better ideas to help the Rusty Hooks. However, Bear also seems somewhat content being the voice behind the man in power, and no one else would dare to usurp Kyle's authority with Bear backing him up.

If the player has completed his quest of returning all the prisoners to the Big MT, then by the time the player arrives at Bloomfield, Dr. Presper and some of his NCR buddies have taken the other space rocket, Hermes-14, and launched to dock with B.O.M.B.-001. Four NCR guys stayed behind to guard the remaining space rocket, in addition to coming to an agreement with the Rusty Hooks. The Rusty Hooks would stay away from the launch pad and the NCR guards wouldn't kill them. Also, the Rusty Hooks would provide them with food and such and the NCR guys would provide additional protection should the need arise (NCR tech is much higher than the Rusty Hooks). 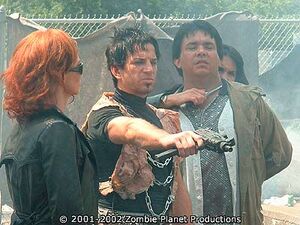 The Area is composed of three maps 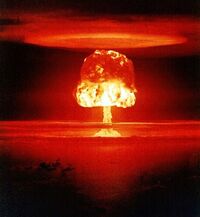 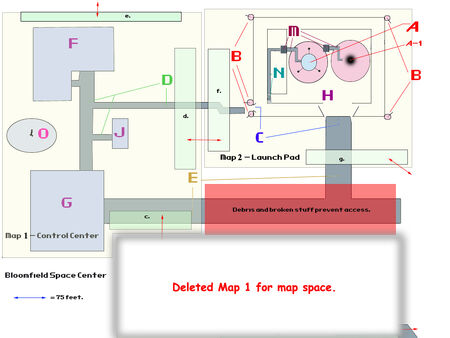 2073 was a turbulent year. Nuclear proliferation reached an all time high. As a reaction to possible nuclear threats, the U.S. government completed a space station/satellite that housed two-dozen nuclear missiles each carrying four warheads. Named the Ballistic Orbital Missile Base, or the B.O.M.B.-001, it was considered the ultimate offensive weapon. The only things missing were the main power reactor and launch instructions and codes. However, since all other space and rocket facilities already used up their resources constructing the missiles for the station, and launching the cargo rockets to carry them to the base, the U.S. needed to scramble to get the much needed codes and a power reactor to the station. Their answer was to use the new Bloomfield Space Center, which was in the process of building a rocket that would go to Mars, and convert the Mars rocket into the vehicle that would carry the codes and reactor to the base. The conversion started in 2074.

So, in August, 2076, the Hermes–13 space rocket was completed and ready to launch at Bloomfield. Unfortunately, by October, 2076, funding for the rocket and Bloomfield had to be drastically cut and diverted to vault technology, thanks in large part to the rising world tensions and imminent threat of nuclear war – the launch of Hermes-13 had to be put on hold. All personnel, except for a skeleton maintenance crew, were reassigned to other locations. Bloomfield, B.O.M.B.-001, and Hermes-13 were essentially mothballed. In November, 2076, the Enclave seized control of Bloomfield Space Center. They knew nuclear war was just around the corner, so they tried to refit the Hermes-13 and convert it into a vehicle that would take selected personnel (mainly themselves) off-planet, destination yet to be determined.

Unfortunately for the Enclave, the bombs started dropping less than a year later. All were either relocated to "hot-spots," or took cover away from Bloomfield. The last people to leave shut down the sub-reactor to Bloomfield and abandoned the facility, letting Hermes-13 and Bloomfield to brave the elements. For whatever reason, the facility never succumbed to nuclear attack. Only time and weather beat on the facility for almost two-hundred years, and neither was very kind. However, Hermes-13 managed to stand proud through the centuries, perhaps in hope that one day it would be allowed to carry out its mission.

The ruined grounds, dark, cold, and dirty buildings, and rusted launch platform super-structure might have laid dormant forever if it weren't for the wandering and greedy spirits of the Rusty Hooks; a band of raiders who wandered the wasteland. In the scorching summer heat of 2252, the Rusty Hooks came upon the remote base of Bloomfield. Kyle "the Hook", the raider leader, knew they had stumbled upon a great potential home. There were plenty of defensible areas, a potential for a rich cache of materials, and that giant pointy thing (Hermes-13) must be a source of great power. With the eloquence of a junior-high drama student pretending to know and quote the great works of Shakespeare, Kyle declared the Bloomfield Space Center the Rusty Hooks' new base of operations.

One of the first things Kyle wanted to do was find out if the facility had a power source. He ordered Sid, the apprehensive mechanic/scientist of the group, to seek out and find a power source, and find a way to get power running. After about two weeks of swearing, threats on Sid's life, and a few deep bruises, Sid managed to not only find the sub-reactor, but he got the thing running – albeit at only forty-five percent efficiency. However, even by bringing this sub-reactor online, the turrets surrounding Hermes-13 ended up killing two Rusty Hooks who ventured too close. It seems the turrets were running on a different power source and operations computer. It was bad enough that no one in the group could cut through the titanium fencing surrounding the Launch Pad, or climb over ten feet of titanium barb wire, but the gattling turrets mounted high on thorned posts exacerbated the giant pointy thing's (Hermes-13) inaccessibility. Kyle ordered that the power be shut down so they could figure out a way to disable the turrets (not really being able to figure out that the turrets were on a different power source and computer – I told you he wasn't that smart), but it seems that once power was turned back on, even if it was not at full efficiency, it could not be turned off without using the proper "security access codes" - whatever those things might be. So, in a flood of cascading wisdom, Kyle decreed the area near the giant pointy thing off limits.

Since then, Kyle and his band organized several raids on caravans throughout Arizona, as well as doing some trade with assorted scum of the wastelands. Sid was tasked with figuring out a way to make the sub-reactor more efficient, as well as scavenge the grounds and create something useful – what that something could be, no one ever explained to poor Sid.