The operation and maintenance of really big guns - miniguns, rocket launchers, flamethrowers and such.

Big Guns is a Fallout, Fallout 2, Fallout 3, and Fallout Tactics skill. It determines your combat effectiveness with over-sized weapons such as the flamer, minigun, missile launcher, Fat Man, etc.

Example: A starting Agility of 5.

The Strength requirements of most big guns, combined with the weight of the guns themselves and the large amounts of ammunition they require make investing into Strength points at character creation a prudent choice for players planning to use these weapons as their mainstays. Most, if not all, big guns in Fallout are burst weapons exclusively, meaning that players cannot make targeted attacks with them. This makes taking the Fast Shot trait a much more viable option for big gun enthusiasts, as they enjoy the benefits of the trait without the drawback.

Example: A starting Agility of 5.

As with Fallout, Big Guns operates in much the same way in Fallout 2 and Fallout Tactics. 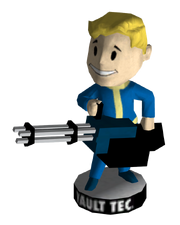 "The best way to win an argument is to be the loudest."

Example: A starting Endurance of 5 and Luck of 5.

As this skill increases, so does your accuracy and damage with all of these weapons, both in and out of V.A.T.S. mode.

When we eliminated Big Guns and spread the weapons around to other skills, there was a lot of head-shaking. After the game came out, not many people complained about or or really even seemed to care. That isn't to say that NO ONE cared -- some people cared, and still care, a lot about it. But the end result didn't generate a lot of negativity and most people responded positively to it or just didn't care.

Big guns (lowercase) always seem to run into some weird conceptual issues because their weight (and the weight of their ammo) seemingly demands some inherent superiority. You make a strategic sacrifice, of sorts (carrying less) to haul that weapon around, so it should be more beneficial in some way than a weapon that weighs less.

In F1/2/3, I practically ignored Big Guns. I almost always used Small Guns until I could roll over to Energy Weapons and then carried that through the end of the game.

In Fallout: New Vegas, Big Guns was merged into other skills such as Guns (minigun), Energy Weapons (Flamethrower, incinerator) and Explosives (grenade launchers, missile launchers). Van Buren, the canceled Fallout 3, would have done the same, though under the name of Firearms.