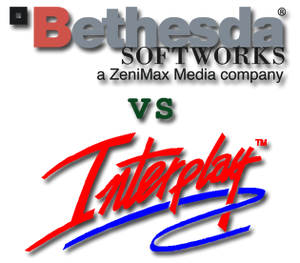 Bethesda Softworks LLC v. Interplay Entertainment Corporation was a legal dispute between Bethesda Softworks, the current owner of the Fallout franchise, and Interplay, the publisher of the original Fallout games. It concerned alleged trademark infringement in connection with past and future Fallout products. The dispute ended in January 2012 with a settlement in which Bethesda acquired full rights to Fallout MMO.

In November 2006, Interplay, headed by Herve Caen, filed a Form 8-K filing to the United States Securities and Exchange Commission (SEC) regarding a potential Fallout massively multiplayer online game.[1] In April 2007, Bethesda Softworks, the developer of Fallout 3, purchased full rights to the Fallout IP for $5.75 million USD. While Bethesda now owned the rights to the Fallout MMO IP as well, clauses in the purchase agreement state allowed Interplay to license the rights to the development of the MMO.[2] Specific requirements were stated in the agreement that if not met, Interplay would immediately lose and forfeit its license rights for Fallout. Development must have begun within 24 months of the date of the agreement (April 4, 2007), and Interplay must have secured $30 million within that time frame or forfeit its rights to license. Interplay would furthermore need to launch the MMOG within 4 years of the beginning of development, and pay Bethesda 12 percent of sales and subscription fees for the use of the IP.

Issues covered by the lawsuit

Bethesda Softworks claimed that Interplay is in breach of the Fallout MMO agreement for failure to commence full scale development by April 4, 2009 and to secure certain funding for the game. Interplay disputed these claims and maintained that it had the right to develop the Fallout MMO Project V13, together with Bulgaria-based Masthead Studios. 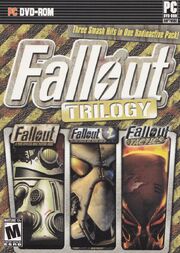 While Interplay was permitted to sell Fallout, Fallout 2 and Fallout Tactics after the sale of the IP to Bethesda, the contract required all advertising, packaging and other promotional material to be sent to Bethesda for approval first, which, according to the lawsuit, was never done regarding either the Fallout Trilogy pack, or any of the releases through Good Old Games, Steam and other digital distribution platforms. Bethesda also claimed that the name Trilogy constitutes unfair competition, since it suggests that the pack includes Fallout 3.

Interplay claimed that Bethesda's termination of its contract with Glutton Creeper Games regarding the license to develop and publish Fallout Pen and Paper d20 was illegal. Bethesda held that Interplay had no rights to license it in the first place, since it was forbidden to do so by the 2004 Exclusive Licensing Agreement.

Future rights to the franchise

According to Interplay, Bethesda interfering in their digital download deals with GameTap, GOG, etc. by sending these companies letters claiming that Interplay has no rights to the Fallout titles constituted unreasonable interference/withholding of permission. Interplay argued that it is Bethesda that is in fact in breach of the contract, which makes the sale of the rights to the franchise null and void, bringing back into effect the former contract, that would only give Bethesda the rights to publish three Fallout games, including Fallout 3 and Fallout New Vegas.

On April 2, 2009 Interplay announced a binding letter of intent with Masthead Studios, a Bulgarian-based developer, to fund the development of a post-apocalyptic MMO codenamed Project V13, which had been all but confirmed to be the aforementioned Fallout MMO. Masthead and Interplay teams will work together under the direction and control of Interplay to complete development of the project.[3][4]

On April 15, 2009, it was announced that Bethesda Softworks moved to rescind the Fallout MMORPG license.[5]

On September 8, 2009 Bethesda filed its original lawsuit against Interplay in the Maryland District Court in Baltimore.

In October 2009, Interplay filed its own counter-lawsuit, arguing Bethesda is in breach of contract and the contract to sell the rights to the series to Bethesda is null and void and Interplay owns the franchise again.

In December 2010, Bethesda added the claim that Interplay only licensed the rights to use the Fallout name and not any other elements of the Fallout games.[6] This claim is disputed by Interplay.[7]

On December 10, 2009, Bethesda's motion for preliminary injunction was denied.

On June 9, 2011, Bethesda filed for another injunction on grounds that there was infringement of the license that hurt's Bethesda's gameplay. This is on the assumption that the story in Fallout Online will alter the story to a damaging level to Bethesda Softwork's future developments such as the speculated Fallout 4.[8] In August 2011, the injunction was denied, and Bethesda appealed the ruling to the United States Court of Appeals.[9][10]

On January 9, 2012 Bethesda Softworks announced that the long-lasting litigation between Bethesda and Interplay, over the rights to Fallout Online ended with a settlement in which Bethesda acquired full rights to the MMO in exchange for paying Interplay $2 million. Interplay's rights to sell the original Fallout games would also expire on December 31, 2013.[11]