This is part 1 of the B.O.M.B.-001 design document for Van Buren, the cancelled Fallout 3 by Black Isle Studios.

To preserve the Great American Way and secure a safe future for our children.

B.O.M.B.-001 is the final destination of the game. It is a large, doughnut shaped space station capable of firing twenty-four nuclear missiles, though it is currently only loaded with eight. It is capable of housing six people, with an area designated for living, recreation, and medical treatment, and a separate area for the true meat of the station; missile control and launch. From here the player may set targets to nuke, or try to avert targets from being nuked. However, either way, something is going to be nuked before the player leaves B.O.M.B.-001 – if he leaves...

Over the course of its two-hundred year wait, the B.O.M.B.-001 sustained a bit of damage. Its circular outer hull remained intact, except for damage to the (what could be called) northern section. A stray communications satellite impacted this part of the hull, resulting in severe damage to the interior door mechanism that linked the Living Quarters to the Command Center. Because of this, the living section and the command section are completely shut off from each other - not that anyone is currently living on the satellite. Should anyone visit B.O.M.B.-001, they would have to perform a space walk with magnetic boots in order to gain access from one section to the other. However, magnetic boots are not needed inside the station since its rotation creates enough artificial gravity for normal, Earth-like movement.

Inside, in the Living Quarters section, the environment is very sterile, with plenty of silver and white paneling all around. Beds fold out from the rounded halls when needed, and fold back into the wall when not in use. The kitchen is small and utilitarian, providing the bare essentials for two people to maneuver and fix meals. There is one bathroom facility, able to accommodate two to three people at a time, complete with suction tubes and wash towels. Entertainment is provided by a now static filled monitor which was originally designed to show movies and television shows. From the looks of the dimly lit, rounded corridors, a half a dozen or so people could have lived on the satellite for an extended period of time. However, the only thing in the frigid living section that vaguely resembles life are the three little brain-bots that scurry about. Their only contact with the Earth below is the array of thick windows that adorn the curved walls along the equally curved corridors.

On the other end of B.O.M.B.-001 is the Command Center. Here lies all the computers and technology necessary to maintain, target, and launch the nuclear missiles. There are several dormant computer stations, and a cut-away map of the earth on the central wall. From this point, someone could calculate targeting solutions and launch the missiles, provided they had the proper launch codes.

When the player arrives at B.O.M.B.-001, he will dock on the Living Quarters side of the station. Upon entering, he will find that power has been fully activated on the station. Some of the fold away beds look like they have been used recently and there is evidence of use in the kitchen and bathrooms as well, not to mention the loud, audible computer voice announcing the current time until missile launch – "T-minus 120 minutes until missiles launch." If the player accesses a computer terminal, he will discover that Dr. Presper and some of his cronies have come aboard the station and taken control. Several information systems have been unlocked by Presper and the player may freely navigate through some of the information. Some higher level information may need some hacking to obtain. While in the living quarters, the player will meet S.O.R.-1000 Alpha, the brain-bot in charge of the living quarters, provided the player reactivates him. Since Alpha is not hostile, the player may freely converse with it.

Once the player figures out that he needs to do a space walk in order to get to the Command Center, he will put on one of the half-dozen or so remaining space suits and magnetic boots, and venture out into space via the air-lock. Outside, the player's magnetic boots kick in and he can walk on the station's inner hull to get to the Command Center air-lock. The only things that block his passage are two magnetized security robots stationed at the satellite's central hub. They start off looking like turrets, but they can detach, seek and destroy an exterior mobile threat (like the player). Once the robots lock onto the player, they will indeed detach and pursue.

Once past the robots and into the Command Center, the player might be greeted by Coleridge and some NCR guards (this all depends on whether the player Rambo'd his way through the security bots, or snuck past). On this side of the station, the player will interact with Presper and his merry band of bad-guys (if the player encountered and killed Pierce, Briggs, and Davidson at the Grand Canyon, they will not be on BOMB-001), as well as the computer systems that set targeting solutions and launch the missiles. Several possibilities may arise in this area, which will be covered in detail later in this document. But suffice it to say, this is the place that allows the player to rain down nuclear death.

The Area is composed of three maps 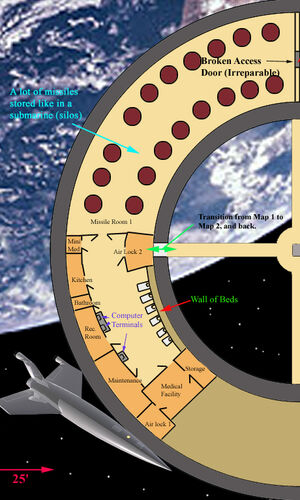 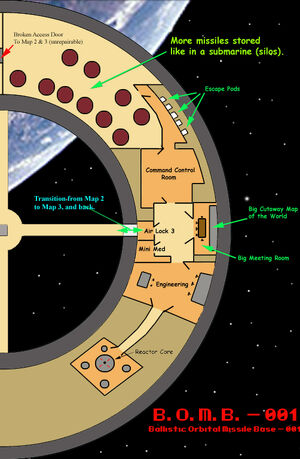 2073 was a turbulent year. Nuclear proliferation reached an all time high. As a reaction to possible nuclear threats, the U.S. government completed a space station/satellite that was supposed to house two-dozen nuclear missiles. Named the Ballistic Orbital Missile Base, or the B.O.M.B., it was considered the ultimate offensive weapon. From orbit, B.O.M.B.-001 could launch missiles to reach any target in the world within minutes. However, as a safety net from accidentally launching nuclear missiles, B.O.M.B.-001 required an onboard crew to launch the missiles. The station was capable of housing eight crew members, but only required one onboard individual to effectively calculate targeting solutions and launch the missiles, as long as that individual had the proper launch codes. Without the proper codes manually entered, the missiles could not be launched, even by accident.

The first two B.O.M.B. missile stations were nearly completed in 2073. Orbiting high above the Earth, all the two B.O.M.B. stations needed were main power reactors to replace the temporary generators that were put in place to maintain the bare, onboard necessities. Unfortunately, the reactors never came. The vessels that were commissioned to take the reactors to the B.O.M.B. stations never left the launch pad at Bloomfield Space Center. By the time the Hermes rockets were complete and loaded with the reactors, nuclear war broke out across the globe. The B.O.M.B. satellites became deadly, yet dormant artifacts of a paranoid age long past.

Over the course of two-hundred years or so, B.O.M.B.-001 remained in Earth's orbit relatively unscathed, except for some minor hull damage at the north end of the station, a result of a communications satellite collision and micro-meteorite impacts. The only thing this affected was the hatch in the missile silo room that linked the living quarters to the Command Center. The impacts permanently damaged the opening mechanism, and any attempt at repairing the door could result in a failure in the structural integrity of the station. Other than this minor foible, B.O.M.B.-001 was still fully functional; well, as functional as can be with just a temporary generator.

B.O.M.B.-002 did not fair as well. Sometime during the two-hundred years of silent orbit, perhaps ten to fifty years before 2253, something big hit B.O.M.B.-002 and sent it crashing down to earth. Pieces can be found in the Grand Canyon, but how big the pieces are, and if there is anything salvageable, remains to be seen.

Other Role-Playing Tests and Epithets