An Auto-Doc (abbreviation of "Automatic Doctor") is a miracle of pre-War medical technology - a device capable of performing even the most complex medical procedures without qualified medical personnel.

Even for a talented physician, these are invaluable aids. Early models were retroactively upgraded with new software and functionality introduced in later Auto-Docs before the Great War and as such, even Mark I devices are commonly able to perform complex surgeries just as well as Mark IX and Sink model.[1]

Typically, Auto-Doc functionality includes regenerating health, restoring crippled limbs and performing surgeries, as well as being capable of implementing implants that enhance both physical and mental performance. Optional upgrades also allow it to mitigate fatigue (by injecting adrenaline - not recommended for extended use) and dispense medical supplies. Before and after the Great War, Auto-Docs have remained a rare technology found in the possession of only a few individuals. Auto-Docs were used to create synthetic substitutes for addictive substances to be used as placebos for chem addicts before the war.[2] They were standard equipment for Vaults.[3] 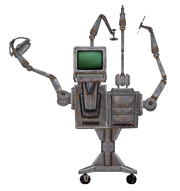 The first model in the Auto-Doc line features four autonomous arms (mounted with a surgery light, a combination scalpel/syringe, tongs, and a multipurpose "hand") attached to a boxy central unit with a CRT control panel attached to its side. Although models of this type are capable of performing even implant installation, they are commonly considered to be obsolete and ancient, in part due to it incorporating proprietary technology, not compatible with later models, making maintenance difficult. They have only been seen in the Mojave Wasteland and the Sierra Madre.

Visually identical to the Mark I model, it is more popular and widespread and parts of it are fully interchangeable between different units. It includes a separate diagnostic module that's prone to burning out after prolonged use. It has only been seen in the Mojave Wasteland.

A stationary type, this large device usually occupies an entire room, but offers a lot more versatility - it comes with its own clamps and braces to secure the patient in,[4] completely independent of a surgery bed, an anesthesia reservoir[5] and a set of automated routines.[6]

hey also include a built in drug synthesizer that can be programmed to create a variety of chemicals like endorphin blockers. It can brew synthetic substitutes for otherwise-addictive substances. These synthetics were used as placebos for chem addicts before the Great War. A function called "priority operator override" can also be used to program non-standard procedures into treatment routines (such as injecting sodium tri-ethylene). The only known models appear in New California.[7]

This Auto-Doc model is prone to malfunction if regular maintenance is not done. It may even randomly decide to execute its exploratory surgery routine.[8] 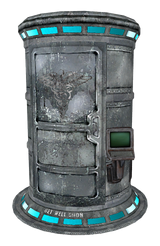 A fully stationary automatic doctor developed at the Big Mountain Research and Development Center Y-17 medical facility, it is made up of a ventilated cylindrical chamber with automated surgical tools mounted in the ceiling and a CRT control panel mounted on the side. When in use, blue lights circle along the top and bottom of the device. Visually, it strongly resembles a Pulowski Preservation shelter. It only appears in the Sierra Madre, Big MT and the Divide. 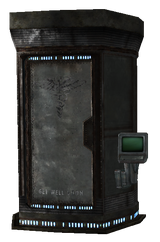 A unique prototype and the most advanced model of Auto-Doc. It was built by Dr. Mobius in The Sink in the Big MT before he left The Think Tank. It has a personality profile programmed in a holotape allowing it to talk (in a stereotypical 1940's military drawl) and have a simple personality (it can sleep by snoring loudly and make passing comments on the general health on the person approaching it).

It is autodidact and can performed complex medical procedures (like implementing implants) alone in contrast to other models demanding someone to apply the procedure. It can give a basic physical exam, cure radiation sickness, lacerations, broken bones and chemical addictions, give a haircut, provide facial reconstruction, implement implants, switch out brains, spines, hearts and perform psychiatric evaluation.