The American people are worth fighting for. The future must be secured. I won't let you stand in the way of that... Once you're dead, we'll finish off this pathetic Brotherhood and become the true saviors of the Wasteland.

Colonel Augustus Autumn is an American commanding officer of the Enclave Department of the Army in the Capital Wasteland in Fallout 3.

Born in 2222, Augustus Autumn spent his childhood on Control station Enclave. His father was a high ranking scientist in the organization, and became the de facto leader of its forces when the oil rig was destroyed by the Chosen One in 2242. Barely twenty years old at the time, Augustus joined his father's forces on their exodus eastwards. His father received orders from a new Enclave President, John Henry Eden, ordering the remnants to relocate to the Capital Wasteland. Settling into Raven Rock and Adams Air Force Base, the Enclave enjoyed peace and stability once more. Only Augustus' father knew that the president they were serving was in reality a sentient ZAX supercomputer. He kept that knowledge a secret, only sharing it with his son shortly before his death. Augustus succeeded his father as the right hand man of the President, though unlike his father, he was far less subservient and often disagreed with his apparent superior.[1]

Head of the Enclave

As the human leader of the Enclave, Autumn was responsible for implementing the directives of the new commander-in-chief and overseeing the day-to-day operations of the organization in the Capital Wasteland, such as covert operations in the field or overseeing research initiatives and prioritizing projects being worked on.[2] Under his leadership, the Enclave would prepare for helping the people of the wasteland, rather than wiping them out. Fresh water, protection, and a solid plan for the future would convince the denizens of the Capital Wastes to rally under their banner.[3][4] After all, the American people were worth fighting for Autumn.[5] The covert nature of the Enclave's operations in the period before their re-emergence in 2277 made humanitarian efforts impossible, although Autumn's forces remained on the lookout. Although careful in conducting surface operations, Autumn's forces aided a wastelander on at least one occasion: Stiggs was recruited into their service, after he was found dying of hunger.[6][7]

The biggest obstacle in Autumn's way was Eden. Internal conflicts between the Colonel and the President[8] made the actions of the Enclave erratic and inconsistent. For example, while Eden sincerely desired a renewed attempt at genocide, Autumn considered this plan too extreme on humanitarian grounds.[9] Although Autumn managed to convince the AI to abandon the plan, the issue would remain an idee fixe of the President, who would attempt to go behind the Colonel's back in the end, by attempting to hire the Lone Wanderer to do his bidding.[10] Although confident the AI was under his control, Autumn realized Eden couldn't be trusted and kept an insurance policy in the form of its self-destruct code in his quarters. His reluctance to actually dismantle the AI would prove to be his undoing[11]

When Project Purity was reactivated by James, Autumn led the first Vertibird assault teams to arrive on site. His forces secured the perimeter and the Colonel confronted James in the facility's control room, requesting that the Project be put under Enclave control and supervision. When James refused, arguing that the project was a private initiative, Autumn shot Janice Kaplinski to coerce him. Furious, James pretended to activate the purifier, while overloading its core. The resulting burst of lethal radiation from the core killed everyone in the room except for the Colonel, who injected himself with a serum that prevented him from dying.[12] As he recovered, the Enclave deployed to the Capital Wasteland in force, establishing a network of constituency enforcement points. Under Eden's orders, the checkpoints performed compulsory genetic compliance screenings. Genetic non-compliance offenders were detained and executed.[13] Anna Holt, taken from the Purifier to Raven Rock, avoided this fate. Without Autumn's influence, Eden even mandated that Vault dwellers would have to be given amnesty first, before joining the Enclave.[14]

By the time the Lone Wanderer reached Vault 87, Autumn made a full recovery and focused once again on reactivating the Purifier. Rather than try and force entry into Vault 87, the Colonel laid a cunning trap for the Wanderer. When they exited with the GECK in tow, Enclave troops ambushed and subdued them. The GECK was secure and all that Autumn needed for his plan was the access code to the Purifier.[15] The Colonel attempted to extract the code from the Wanderer, interrogating them at Raven Rock in person. Impatient for results, he was furious when the prisoner proved recalcitrant. Before he could take any action, though, he was recalled by Eden to the President's office. While the Colonel was away, the President released the Lone Wanderer. Autumn openly countermanded the President's orders and ordered his troops to shoot the Wanderer on sight. As the loyalty of human troops lay with the Colonel, rather than the unseen President, they obeyed. Eden wanted the Wanderer alive and set the automated defenses of Raven Rock loose on the defiant soldiers. With the base impossible to hold, Autumn ordered its immediate evacuation to Jefferson Memorial.[15]

Autumn realized that the only force capable of going toe to toe with the Enclave, despite its technological superiority, was Lyons' Brotherhood of Steel. The fortifications around the Purifier combined with Vertibird and artillery support would have been enough to repulse the chapter under normal conditions - but with Madison Li, they managed to reactivate Liberty Prime and deploy him in a direct assault on the Purifier. By the time it became apparent that the Memorial would fall, it was too late for the Colonel to evacuate to Adams AFB. Confident that reinforcements and a counter-strike would arrive in short order, Autumn made a final stand at the control room of the Purifier, confronting the Lone Wanderer and Sarah Lyons.[16] 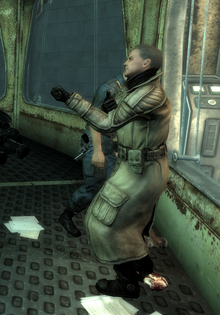 The injection that saves Autumn's life.

* Only during Take it Back!