The Arlington House is a medium sized house in the center of Arlington Cemetery.

The Arlington House is a mansion located in the Arlington Cemetery that was once the home of Confederate General Robert E. Lee. The mansion was built at a high point on an 1,100 acre (445 ha) estate that prominent resident George Washington Parke Custis' father, John Parke Custis, had purchased in 1778.

After the Great War and with the subsequent abandonment of Washington D.C., it stood empty. It wasn't until the late 2270s that a raider by the name of Junders Plunkett claimed it as his own, to hide away from the Regulators. Sheltering among the ancient dead, Plunkett also cultivated a shrine to Abraham Lincoln, who, to him, is a mystical figure.[1]

Inside the house is the Luck bobblehead, located on the bookshelves on the west wall of the basement. The house is good for player housing because there are beds you can rest in, a workbench and lockers to hide your loot in. In the basement there is a shrine to Abraham Lincoln, (ironic as original owner, General Lee, fought against the Union) complete with flowers and wine.

Junders Plunkett will attack you if he finds you inside the house. He is in the basement and runs upstairs if he detects you. He has Plunkett's Valid Points and Junders Plunkett's Finger, which can be turned in for 1000 caps at the Regulator HQ.

To the south of Arlington House there is Mama Dolce's food industry and Falls Church station and to the north there is Arlington/Wasteland Metro and Arlington utility. 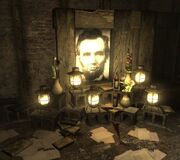 The Arlington House appears only in Fallout 3.