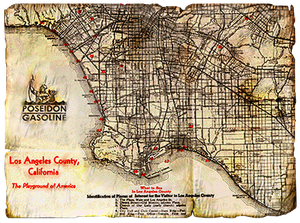 Angel's Boneyard is a city formed in the ruins of the pre-War Los Angeles and one of the states of the New California Republic.

Most people in L.A. who survived the nuclear blasts died after the bombs dropped, due to radiation poisoning, disease, famine, and other reasons. The city itself was ravaged by fires and nuclear bombs themselves – in fact, one of the warheads effectively turned Orange County into a crater. Some inhabitants took shelter in the demonstration vault, and eventually most of them emerged in 2092.[1] Many of them were the founders of Adytum, a fenced sections in the suburbs of the old Los Angeles. Some, however, founded gangs, like the Blades and the Rippers.[2]

In 2155, the Master learned the location of the Los Angeles Vault, conquered the inhabitants and set up operations there, and the human cultists began to use the vault as their powerbase. Eventually, a monumental building known as the Cathedral was constructed above the vault. The cultists thus became known as the Children of the Cathedral. Of those that remained in the Vault, most became the Master's servants and members of the Children of the Cathedral. Those that left could be part of almost any organization in L.A.[3]

In the 2150s, a pack of deathclaws appeared in the Boneyard, taking over the base of the Rippers. In 2158, Jon Zimmerman, the town's mayor, hired a band of mercenaries known as the Regulators to help protect Adytum from the deathclaws and the odd random attack by raiders, who by 2161 were in control of Adytum.[4] The Vault Dweller recounts that "[he] found many enemies, and a few friends, in the Boneyard. [He] killed when necessary and learned more about the nature of [his] true foes." Sometime during his journey in the Boneyard, he killed the deathclaws which allowed the Gun Runners to expand their business.

State of the New California Republic

By 2189, the Boneyard became one of the states of the New California Republic and Adytum became known as New Adytum, holding seats in the NCR Senate.[5]

As one of the largest cities on NCR territory, it was a natural choice for many organizations to place their headquarters. Thus, by 2281, the Boneyard is host to the Republic's Reserve[6] and the Follower's Angel's Boneyard Medical University[7] among many others. As the NCR now has control over the Boneyard, it has become much more stable, with the buildings rebuilt, redecorated and renovated. However, some people that live there claim it is not the best place to grow up,[8] indicating the NCR still has some work to do and are working to fix it.[9]

Angel's Boneyard appears only in Fallout, but is mentioned in Fallout: New Vegas.