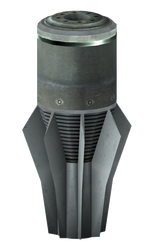 Launched from alien motherships, these beacons allow point-to-point teleportation between the ship and the impact site of the beacon. During the battle against the other mothership, one such beacon will accidentally be sent to Earth to the alien crash site, allowing the Lone Wanderer to use it for traveling between Earth and Mothership Zeta.[1]